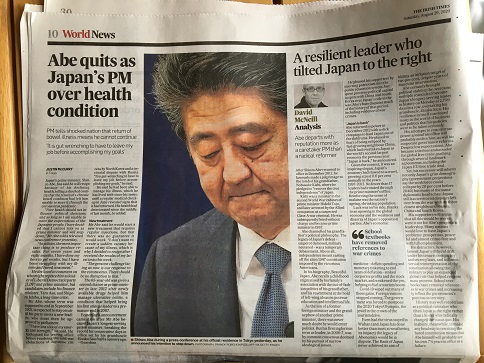 It is interesting to compare this article with the one David McNeill wrote when Naoto Kan, the then-leader of the lefty Democratic Party of Japan (DPJ), stepped down as the Prime Minister in August 2011.

Kan’s record as the PM was dismal. He mishandled the 2011 earthquake/nuclear plant incident. He did not do any good to the economy or foreign affairs. The approval rating for his administration plunged to as low as 15%.

Despite all these, McNeill’s article for Kan’s resignation was sympathetic and even poetic (see the first paragraph of the article). The headline read “'Least bad' Japanese leader Naoto Kan throws in the towel”. He quoted two academics who both desperately tried to save Kan’s butt. No opposite view was offered.

On the other hand, in his latest article, McNeill tried painstakingly to make sure the reader would perceive Abe as a hawkish right-winger/revisionist, played down what Abe achieved and hoped Abe would be remembered as a caretaker (well, McNeill’s wording is “History may well record him as a political caretaker”).

Of course, Abe did not play a perfect game and his record is mixed. However, compared to Kan, he fared much better. In terms of the economy, Nikkei went up from 8,500 to 24,000, the unemployment rate came down from 4.3% to 2.4%, and the jobs-to-applicants ratio rose from 0.8 to 1.6. (The figures are all 2012 vs. 2019). The suicide dropped from 27,858 to 20,169 as well. As for the international relationship, he enhanced existing alliances and developed new partnerships. The number of Covid-19 deaths is relatively low.

According to the Kyodo poll conducted on 29/30 August after the announcement of his resignation, the approval rating for the Abe administration soared by 20.9% from a week ago to 56.9%. On hearing the announcement, Nikkei collapsed by nearly 600 points to 22,735 and ended the day at 22,882.

McNeill clearly failed to capture the reality and the prevailing sentiment in and around Japan again. Or he refused to do so. After all, McNeill is a kind of journalist who puts his own political or ideological agenda before journalistic commitments to finding the truth and documenting empirical facts. Look at the final line of the article. It is McNeill who wants to see Abe’s tenure as a failure. That is his wishful thinking. A wishful thinking does not belong to the straight news section. It may to the opinion section if anybody’s wishful thinking is ever worth publishing on a national newspaper.

Here is more realist/less ideological piece from BBC if interested.

For what McNeill described as “School textbooks have removed references to war crimes” which was the highlighted text on the print copy, Nilsson-Wright said, “moved away from overly self-critical historical narratives in high-school textbooks.”

Regarding Sino-Japanese relations, Nilsson-Wright wrote:
“Sensibly, while Mr Abe has remained acutely aware of the geostrategic threat posed by China, this has not been allowed to block opportunities for pragmatic co-operation with President Xi Jinping.”

Nilsson-Wright concludes his article as follows:
“Notwithstanding Mr Abe's aspirational, but at best partially realised nationalist ambitions, his pragmatic achievements are likely to be his most enduring legacy.”