McNeill's article was punlished for the Irish Times on 22/Dec/2019 online and 23/Dec/2019 on paper. My comment below was posted in the comment section of the article.

This article is written by a journalist who is part of those people who once hampered Shiori Ito’s pursuit of the truth. He is now presenting himself as a champion of women’s rights here.

Ito had a press conference on 29 May 2017 at the Judiciary Journalist Club. She tried to have another one the following day at the Foreign Correspondents' Club of Japan (FCCJ) but her application was disapproved by its Professional Activities Committee (PAC). The reason was explained by David McNeill, who wrote this article and was a member of PAC at the time, to the Weekly Gendai, “what is important to the (foreign) correspondents is whether this incident affects Abe administration.” 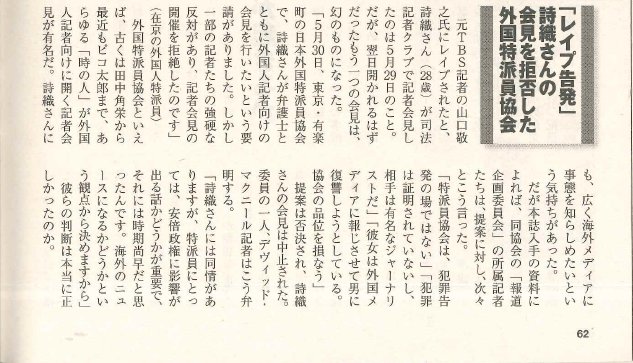 Really? Was this high-profile rape case news-worthy only if it had political implication? Even if alleged offender Yamaguchi was an employee of the Tokyo Broadcasting System (TBS), one of Japan’s major broadcasting companies, and the incident happened in relation to Ito’s job or intern placement?

As this article says, an arrest warrant of Yamaguchi was inexplicably revoked. The left (the opposition parties and main-stream media) tried to associate this with Yamaguchi’s close relationship with PM Shinzo Abe.

However, there is an inconvenient fact that doesn’t fit their narrative. Some key figures of the then largest opposition party Democratic Party of Japan (DPJ) dissuaded its members to question about the incident at the Diet although the questioning might have helped finding the truth as well as achieving their political gain.

Journalist Takashi Uesugi, who supported Ito personally, but didn’t go along with the narrative, has his own podcast program “Op-Ed” in which those key figures who dissuaded questioning were named as Yukio Edano (former Minister of Economy, Trade and Industry) and Jun Azumi (Former Minister of Finance), both of DPJ. Uesugi claims that he has asked Edano (now the leader of Constitutional Democratic Party of Japan that was developed from DPJ) and Tetsuro Fukuyama (CDPJ’s No. 2) to explain why in many occasions, but in vain.

Hiroyuki Konishi, a lawmaker in the Upper House and then a member of DPJ, also acknowledged such dissuasion from some members of opposition parties at the FCCJ press conference on 25 October 2017.

Why did the largest opposition party self-destroy the golden opportunity to attack the ruling party if the arrest warrant was indeed revoked under the influence of Abe administration? Why didn’t TBS investigate, address or report the incident when they were aware of the police looking into it as a possible rape case and how come could they get away with it? Why is everybody from the left, including the opposition parties, the main-stream media as well as this article so quiet about TBS, which quite possibly is responsible for the incident as Yamaguchi’s employer, and is potentially powerful enough to influence the law enforcement authorities? Why does Ito seem to have made no effort to hold TBS accountable? Why did FCCJ, a club for foreign correspondents who generally love Japan-themed erotica so much like Sir. Richard Burton who creatively translated the Arabian Nights with loads of sexual exaggerations and additions, initially turn down Ito’s presser?

It is clear this article doesn’t tell the whole story. 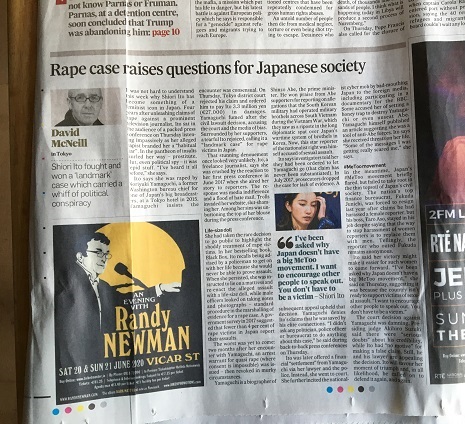